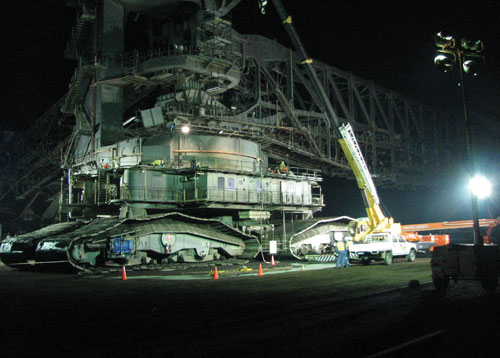 One of the world’s most advanced heavy lifting systems has been deployed in Australia to maximise safety and precision during maintenance of a huge dredger at the largest coal mine in the Southern Hemisphere.

The PLC controlled Enerpac Synchronous Lifting system was used by Hydraulic and Pneumatic Pty Ltd of Morwell in conjunction with Plant Performance Group Pty Ltd to enhance precision and safety while monitoring the 2200-ton load’s centre of gravity during the lift on Dredger 16 at Loy Yang Power. 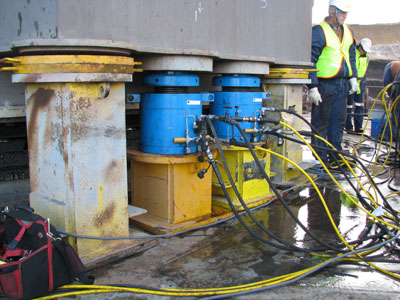 The Synchronous Lifting technology chosen for the task of hoisting Dredger 16’s superstructure to inspect and refurbish the giant machine’s slewing ball race uses digital synchronisation control accurate to within a 1 millimetre between leading and lagging lifting points. Accuracies are available down to 0.1mm.

The delicate job of carrying out the lift with maximum safety and minimum downtime was carried out with the assistance of a team led by Shift Supervisor Mr David Little of Silcar, which is an asset manager and provider of maintenance services for technically complex assets.

Project Manager Mr Tom Lamin of Plant Performance Engineering acting for Loy Yang Power, said the lift proceeded smoothly, with the hoisting being undertaken on May 7 and lowering on May 13. The huge task was facilitated by the accuracy and fluency of the Synchlift operation, and the real-time centre of gravity display.

Hydraulic and Pneumatic Sales Manager Mr Robert Lewis said the job required thorough planning to maximise safety and minimise downtime for a client operating the largest open cut coal mine in the southern hemisphere. Loy Yang operates 24 hours a day mining more than 30 million tonnes a year of the brown coal that provides more than half of the State’s electricity needs.

“Everything is on a large scale – the slewing ring is huge and the superstructure above it is bigger than many ships’, so the job had to be done with incredible care and precision to meet the client’s top world class standards of safety.”

The Synchronous Lifting system used by Hydraulics and Pneumatic was an eight-point model that can be used with multiple cylinders ranging from 10-1000 tonnes capacity each. Larger models feature up to 64 control points. The hydraulic technology involved is the same type chosen to maximise safety on some of the world’s most precise lifts, ranging from Ariane rocket launch pads and oil drilling platforms in Europe’s North Sea, to splitting coal shovels and building and weighing wharves and infrastructure in Australia.

“In addition to being precise and giving us the centre-of-gravity accuracy we needed, the technology had to be able to function flawlessly in a harsh environment, with coal dust blowing around the power unit.

“We needed to be assured – and this turned out to be exactly the case – that the technology package developed in conjunction with Enerpac would operate in total safety and reliability.”

Enerpac Engineer Ray Paasila said safety was built into the synchronous system – “During lifting in automatic mode, the software meticulously follows each lifting point and each cylinder. The software also constantly monitors which lifting points are in the highest and lowest positions and whether these are still within the set tolerances. If a correction has to be applied, the 2/2 movement valve opens briefly and the relevant (lowest) cylinder receives a short hydraulic impulse, instantly followed by a new reading. This correction process is so fast that the relays that control the valves give the effect of perfect switches.

“The course of the lifting process can be followed on screen (per lifting point). The software also contains an extra control function, by which the system can temporarily be stopped and manually corrected. Emergency stops also built into the system. If something goes wrong, the system will stop automatically and block all points of support.

“In addition to time saving and the exceptionally accurate and virtually stress-free movement of an object, the advantages of Synchronous Lifting include its ability to record and document the entire repositioning process. All the values are stored in the control systems memory for later use. With satisfactory progression of the procedure, this provides both the contractor and the client with a clear guarantee that excessively high stresses have not occurred.”

Enerpac synchronous lifting technology has been used in Australia for integrated solutions involving ultra-precision civil, mechanical, industrial and maintenance engineering tasks, including the splitting of a dragline at Curragh coal for maintenance and during vital stages of the ongoing $A1.2 billion expansion of the Dalrymple Bay Coal Terminal near Mackay, where it was used to lift and weigh 80-tonne sections of wharf.

“In addition to time saving and the exceptionally accurate and virtually stress-free movement of an object, the advantages of Synchronous Lifting include its ability to record and document the entire repositioning process.

“All the values are stored in the control systems memory for later use. With satisfactory progression of the procedure, this provides both the contractor and the client with a clear guarantee that excessively high stresses have not occurred.”