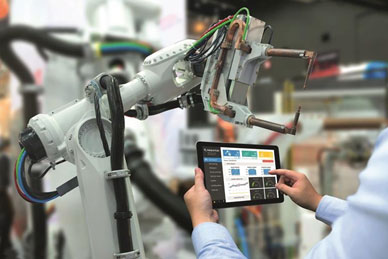 It’s a time of revolution in industry – automation, digitalisation, Industry 4.0 are just some of the current buzzwords. Robots are becoming more compact and agile, so cable manufacturers like Lapp Australia have to design cables that meet the growing requirements of a dynamic market.

Robotics is an area that is developing rapidly. Worldwide, growth in the installation of industrial robots has been 16 percent per year on average since 2010, with annual growth forecast to be 13 percent by 2019. Sectors like manufacturing, materials handling, machine building, food and beverage, rail, and resources are swiftly catching up to automotive first adopters of agile robotics technology, as well as use in consumer electronics increasing particularly sharply. As part of this trend, small and medium-sized producers are increasingly investing.

Manufacturers of robots are responding with new models that are more compact, more versatile and last longer. In the past, robots would be replaced when a product generation was phased out, but today they are taking on new tasks – and these change more frequently than before. The variety of movements means that the loads on certain components are increasing, particularly the cables. They perform torsion and kinking movements, frequently a mixture of the two, and with different bending radii and torsion angles as well. 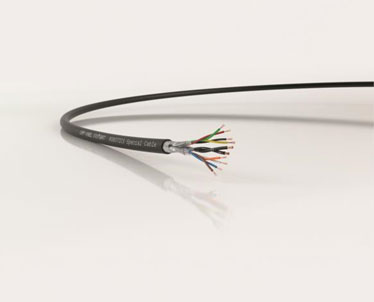 A special robotics cable from Lapp. In robotics, the cables often have to
withstand extreme torsional and bending loads.

Lapp has numerous robust cable types in its standard range, which have performed for years without failing on many robots. However, these standard cables are not necessarily suitable for special applications such as those outlined above – and these applications are on the increase. This is where cables uncompromisingly tailored for the specific use come into play. For cable manufacturers, robotics can be seen as the supreme discipline.

The most important difference between robot cables and conventional moving cables is that the former have to withstand both bending and torsion over their entire service life, and in development they are designed fundamentally differently to a power chain cable, for example. There are four key parameters:

Braided conductor class: Robot cables should have at least class 6 conductors, which are designed for continuous movement in line with the standard. Lower classes are less suitable, or totally unsuitable. However, sometimes even braided conductor class 6 is not sufficient. For cables that need to be highly bendable and twistable, Lapp uses braids outside the standard in which the individual wires are just 0.05 millimetres thick, considerably thinner than the thinnest braided wires covered by the standard.

Torsion angle: A typical value is +/- 360°/m, which means that a cable can be twisted one full revolution to the left and once to the right about its axis per metre of cable length. This applies to cables without shielding. With shielding the value is typically +/- 180° or half a turn per metre.

Bending radius: Ideally, this is between four and 7.5 times the outer diameter and thus in some cases lower than for cables that are only subjected to occasional movement. This allows the cables to be coiled in tight radii and in tightly packed hose assemblies.

2. Three times about its own axis

For some applications, even these properties are not sufficient. For these, Lapp supplies special cables qualified for even higher torsion angles, including a cable for 3D laser welding robot that allows torsion of over +/-1,000°/m. This means that the cable can be twisted almost three times about its own axis – this is unique worldwide. For the robot concerned this is definitely not overkill, as the robot arm moves completely freely in three dimensions, twisting several times about its own axis.

The amazing thing is not the sheer extent of the torsion angle, but the fact that this movement is possible over many years with no deterioration in properties. This particular cable is qualified for a minimum of seven million cycles, proved by tests at the Lapp testing centre, which is currently being extended for even more dynamic movement tests. Another special robot cable is certified for over 15 million cycles and, with +/-720°/m, allows two turns about its own axis per metre. To create cables capable of handling such extreme loads, the Lapp engineers have to dig deep into their box of tricks. For the cable discussed above with a +/- 1,000°/m torsion angle, for example, braids made of a special copper alloy were used. They retain their minimum electrical resistance even when bent or twisted and after a large number of movement cycles.

These properties can only be achieved with a sophisticated and complex cable construction. There are several factors that can be influenced:

Stranding types: Bundle stranding is usual for robot cables, with the individual conductors combined in one or more bundles. These cables withstand both bending and torsion. If the electrical properties demand it, for example for data or servo cables, cables suitable for use on robots are stranded in pairs.

Core insulation: The insulation of the cores has to be able to withstand several million movement cycles. The best solution is a thermoplastic elastomer, or TPE.

Sliding support: Elements help the components in the cable to move against each other with as little friction as possible. They also act as filler to make the cable circular. Sliding supports can be stranded plastic fibres that fit into the gaps or voids between the cores. Correct placement of these filler fibres requires a high degree of know-how. Thicker cores are often wrapped in a polytetrafluoroethylene or polyester film fleece wrapping to make it easier for them to slide against one another, particularly under torsion.

Shielding: Tests have shown that under torsion the gaps in the braided shield increase in size over time, because the small wires that make up the braid are pulled apart by the torsion and break over time. This pushes up the contact resistance, which has a detrimental impact on the desired shielding effect. Above around half a million torsion cycles, spinning with copper wires is superior to braiding. All the wires point in the same direction and the contact resistance hardly changes over the service life.

Outer sheath: Here, as in many industrial applications, the material of choice here is the very robust polyurethane (PUR).

Customers are increasingly expressing a demand for the cables to be as space-saving as possible because robots are getting smaller all the time. Increasingly, hybrid cables are being used, containing all kinds of cables such as power, data and signals, in some cases also hoses for pneumatics or the air or protective gas supply. For example, Lapp has developed cables for a welding robot that contains dozens of cores for power, signals and Industrial Ethernet in a single sheath. Without this hybrid cable, the customer would not have been able to realise this application. Although some of these hybrid cables are 30 millimetres thick or even more, they take up 30 percent less space than laying individual cables.

As the requirements for robot cables are so diverse, extensive tests are unavoidable for the manufacturers. However, many cable suppliers also have high minimum order quantities, in some cases several kilometres. In the case of Lapp, sample lengths starting at 100 metres are possible. This enables manufacturers to carry out tests without having to spend a lot of money on the cables.

*Simon Pullinger is General Manager of Lapp Australia, which was established this year in new 3100sqm premises at Eastern Creek, Sydney from where it will operate nationally to meet demand for technologies used in future-focussed areas of industry, such as automation, robotics, energy management, data distribution and intelligent manufacturing, buildings, infrastructure and process engineering.

The new facility is structured to bring new levels of service and choice to the Australian market, offering strong inventory of over 1,000 product lines onshore as well as direct access to more than 40,000 standard items from Lapp’s global ranges.

The Lapp brand is a byword for competence, quality and innovation all over the world. The high degree of continuity and stability guaranteed by the owning family, combined with an uncompromising customer focus, innovative strength and consistent branding, are a key part of this success.