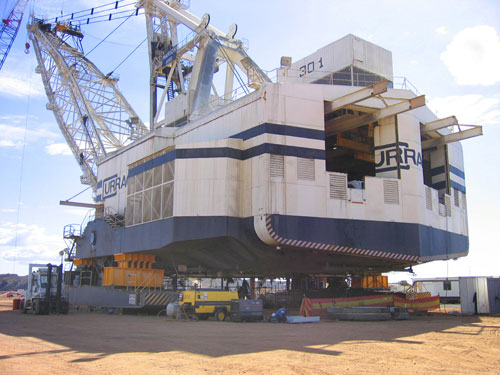 One of the world’s largest precision lifting tasks of land-based equipment has been successfully undertaken in Australia.

An Enerpac synchronous lifting system has been employed by G&S Engineering Services in Queensland to lift, within tolerances of 0.5mm, a huge mining dragline weighing more than 3500 tons.

The PLC-controlled precision hydraulic system was used to lift the dragline for essential maintenance of the bearing surfaces on which the drag line swivels. It also delicately tilted the huge suspended weight to simulate different loads on the structure so bearing surfaces could be precisely machined to accommodate them and maximise the bearing surfaces’ lifespan. G&S Engineering purchased the system based on Enerpac’s industry leading technology, proven track record and ability to precisely control up to 10,000 tonne lifts. 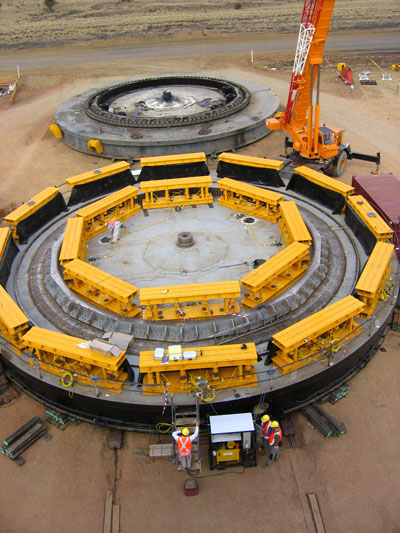 The size and controllability of the lift is significant not only for safe and precise lifting of heavy mining equipment, but also for precision lifts across a spectrum of industries. These include building and construction (building lifts), civil engineering (bridge lifts), energy (turbine lifts), heavy manufacturing and primary processing (servicing and positioning of plant) and resources and petroleum (building of onshore and offshore rigs), says Enerpac Australasia General Manager Mr Anders Mangen. The unqualified success of the lift shows a wide variety of industry can use the new technology to replace traditional manual alignment and synchronisation of lifts, so as to save time and money while increasing safety. They can also use the precise control available to tilt lifts so as to simulate loads and account for deflection.

The cylinders, controlled in groups of four around the perimeter of the dragline’s base, lifted it 10mm at a time for optimum precision and control. They raised it a total of 200mm to allow machining between the upper and lower rails on which a bearing is placed. The system simulated actual loading on the drag line to maximise and accurately predict the life of this bearing.

The whole operation involved Enerpac specialists from Australia, Singapore and Europe overseeing work performed by G&S and Curragh staff. They were all witness to the world’s first lifting of a dragline using the synchronous system. The operation proceeded without a hitch, said Mr Mangen, whose Australian lifting team was headed by this country’s authority on synchronous lifting, Enerpac Engineering Manager Mr Tony Cooper.

“Draglines are probably the largest land-based equipment moving across on the face of the earth, typically ranging in size from 2500 tonnes to 6500 tons. Throughout Australia they ‘walk’ across the surface of the land, progressing a few metres at a time as they pause to scoop huge masses of overburden to expose resources being mined.

“The draglines at Curragh scoop up typically 100 Tons of overburden with each pass of their giant buckets – a weight equivalent of two loaded semi-trailers of spoil,” said Mr Mangen.

The Synchronous Lifting System received an award from the European Engineering Institute in recognition of good engineering workmanship.

“We believe this is one of the world’s largest systems to be used on mining applications, an area in which has enormous benefits for clients such as G&S Engineering Services. It is certainly the first time in the world the system has been used on a dragline,” said Mr Mangen.

The synchronous system provides pinpoint accuracy by minimising the difference between leading and lagging lifting points, ensuring optimum safety and stability throughout the entire lift.  In addition to great safety and stability, the high-pressure (700 bar, 10,000psi) cylinders employed offer great weight and space savings compared with the much larger lower-pressure types of hydraulic cylinders previously used.

“On-site the benefits of these smaller and lighter cylinders translate into more space under and around the job, permitting G&S Engineering Services to employ uninterrupted use of the latest laser-guided machining systems when they are machining the upper rail on which the dragline rotates.”

The Enerpac system used by G&S has a PLC to control three pumps and their associated manifolds and valves. The Enerpac Synchronous Lifting System electronically controls and monitors movement during the hydraulic raising, lowering, tilting and positioning of very heavy objects.

Mr Cooper says such monitoring and control is usually done manually, but this can give rise to considerable problems in some applications.

“Internal stresses resulting can ultimately cause hidden damage compromising serviceability and safety,” says Mr Cooper, who provides technical backup for Enerpac high-pressure (700 bar, 10,000psi) equipment throughout Australia and New Zealand while linking customers with the world-wide resources and design capabilities of the Actuant Corporation, of which Enerpac is part.

Mr Cooper travelled to Spain during May to co-ordinate the delivery to G&S Engineering Services from Enerpac’s Centre of Excellence for Integrated Systems.

He was joined in Australia for the lift by Enerpac Integrated Systems Specialist Mr Sidney Khoo from Singapore, Fernando Cendoya & Javier Montero from Enerpac’s Centre of Excellence for Integrated Systems in Spain. They all supported the system during commissioning with training and operational backup.

Features of the Enerpac system used by G&S Engineering Services include;

The precision achieved by G&S Engineering Services Enerpac synchronous system is so great that it can be used to safely tilt massive objects during lifting to enable exact aligning of upper and lower bearing surfaces.