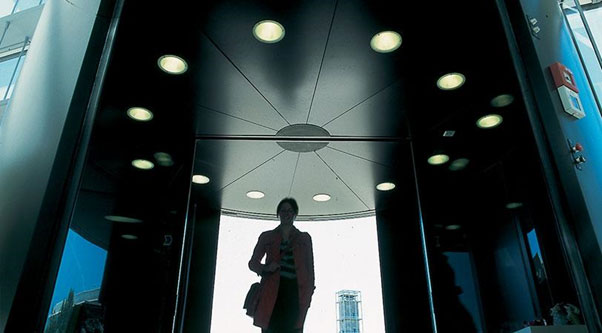 Boon Edam Tourniket ranges, one of the major ranges to which the green technologies apply

The company – which provides entrance technologies for dozens of Fortune 500 companies in 27 countries globally – is making available features such as radar-based traffic sensors and enhanced door sealing to optimise the inherent heating, ventilation and air conditioning HVAC advantages of revolving doors.

The company is also offering OEM-standard maintenance packages that optimise the HVAC performance and operating durability of revolving doors used throughout Australia and New Zealand in applications including retail and hospitality chains, health and educational facilities, corporate HQs and major Government, tourist and transport facilities.

“There is no doubt the energy savings available through revolving doors are very real and very significant for a host of major industries and building types in this environmentally attuned 21st century,” says Mr Michael Fisher, Managing Director of Boon Edam Australia. “With its always open, always closed functionality, revolving doors are particularly suited to Australasia, where this in-built advantage helps to control not only losses of heat, but also losses of cool air produced by hard-working HVAC systems.”

The company’s latest Green OEM and Retrofit Package components available throughout Australasia can include an innovative radar-based motion detector for automated revolving doors.

These detect the walking direction of people near the door, ensuring the door will only turn when someone wants to enter it. This reduces both the power consumption of the door and the dynamic energy losses, saving energy for heating or cooling a building.

Another optional component of the green packages is improved weather strips, consisting of a combination of horse hair and a Neoprene interlayer that reduces the air leakage by at least 30 per cent, saving hundreds of dollars’ worth of energy on each individual application.

The packages can also include a new lighting system with LED lights which have a longer lifespan and 60% lower energy consumption than the halogen lights that are currently used in most revolving doors. The smart lighting control allows the ceiling lighting to be turned off when the door is not in use.

The OEM and retrofit packages apply to major Boon Edam ranges – including its Tourniket ranges, a 5m tall custom-built variant of which is used in the current $A100 million revitalisation of the Rialto project in Melbourne – as well as compatible other-brand installations.

“Calculating the exact amount of savings available per building is a science that depends on a host of factors, including the individual site, how heavily it is trafficked, the state of maintenance of the revolving door, and whether it is used in an hotel, retail outlet, educational institution, health facility, commercial headquarters and so on,” says Mr Fisher.

“But the benefits of revolving doors are accepted worldwide, for both retaining warm air and cool air, which can be particularly important to the energy efficiency of HVAC plants in Australian and New Zealand buildings.

“People can probably remember the days of walking past offices and shopfronts and hospitality venues on hot days to be greeted with a beautiful icy wave of cold air emanating from their open entrances. It was welcome relief, but designers and facility managers can’t afford to make a gift of their expensive cooled air like that these days,” says Mr Fisher, whose global parent company Royal Boon Edam, with over 140 years of entrance solution experience, has among its clients some of the world’s largest firms and household names in technology, resources, retail and health and hospitality. 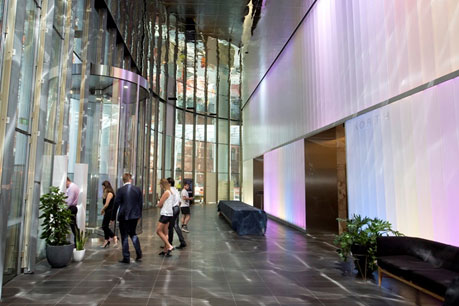 The Rialto revitalisation project in Melbourne (above and below) showcases striking and practical
5m high Boon Edam revolving doors, the tallest in the Southern Hemisphere 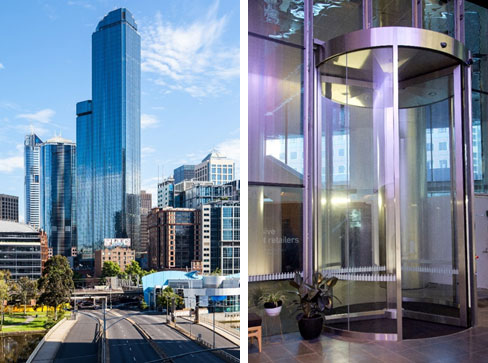 Proper maintenance of revolving doors to optimise their energy conservation was one of the factors behind the decision this year to expand Boon Edam’s service division in Australia and New Zealand.

In addition to its own specialist staff, Boon Edam has joined forces with door maintenance leaders and automatic door manufacturer Auto Ingress Pty Ltd in Australia, and with leading New Zealand door installation and service company Commercial and Industrial Doors.

“Although revolving doors generally enjoy a built-in energy conservation advantage, this can be extended further by sensible maintenance and upgrading where required,” says Mr Fisher. “Our maintenance services – which are conducted to the global standards of Boon Edam – can deliver benefits not only with OEM equipment, but also wider brands that can be both improved in energy performance while also having their durability extended.”

Boon Edam’s service and maintenance helps to keep the equipment compliant with Australian Standard AS:5007, which requires doors to be inspected every three months.