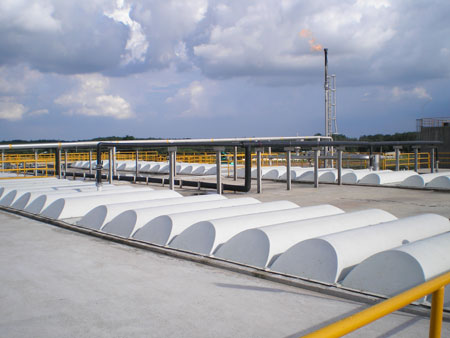 One of Asia’s newest paper mills is setting global benchmarks for the environmental standards achieved by its waste water processes while also saving millions of litres of fuel oil by extracting biogas from effluent to reduce its carbon footprint.

The Vina Kraft paper joint venture in Bin Duong Province of Vietnam.- with an annual production capacity of 220,000 tons – uses an anaerobic/aerobic treatment tertiary plant from Global Water Engineering to cut effluent COD pollution levels by 99 per cent while also producing up to 12,300 Nm3 of biogas a day, equivalent to 8,800 l/d of fuel or several million litres a year.

The 35,000 sq m paper mill on a 38ha site, which the owners say is the largest and the most advanced in Vietnam, was built to produce packaging paper for applications including food and beverages, consumer products, clothing, shoes, electrical appliances and furniture. A joint venture between the Siam Cement Group and the Japanese Regno Co Ltd, the plant was constructed to achieve world’s best environmental standards in its treatment and recycling of effluent and in its extraction of green energy to power boilers and heat processes as an alternative to fossil fuels.

“Green energy generation from wastewater treatment does not always get as much attention as the more traditional renewables, such as solar and wind. But in fact there is a huge, often hidden, potential in using wastewater as a source of renewable energy while simultaneously protecting the environment. In addition, biogas green energy is more reliable and versatile compared with solar and wind because it is produced 24/7 at a high rate and can generate both heat and electrical power.

“The Vina Kraft plant’s waste water and green energy achievements are remarkable for a plant of this scale – particularly one using recycled paper – and easily among the best ever obtained globally, since it commenced production in 2009-10. This is a landmark achievement not just for Asia, but on a global scale,” says Mr Ombregt, whose company has completed more than 300 water and waste water projects in more than 60 countries including Asia, Africa, North and South America, Australia, China, Europe (including Eastern Europe) and Russia. GWE has successfully built and commissioned more than 75 biogas utilisation systems for clients worldwide.

GWE’s Vina Kraft plant has a capacity of 12,000-13,200 m3/d wastewater and maximum of 57,400 kg/d Chemical Oxygen Demand (COD) effluent. Performance achievements to date – on influent of up to 6100 mg/l COD and after anaerobic, aerobic, tertiary DAF/flocculation treatment and advanced oxygen processes (AOP) – include:

Vina Kraft’s multiple-step purification and green energy process involves in-factory pre-treatment with advanced PISTA® grit removal and pre-screening of some streams before they enter the effluent treatment plant proper through a first screening step leading into an equalization basin mixed by coarse bubble air aeration to avoid smell. Peak “off spec” loads are diverted into an emergency pond, equally mixed by coarse bubble aeration, for later gradual reprocessing. After further pre-treatment by rotary screens and primary DAF (dissolved air flotation) with chemical flocculation, the effluent passes through a cooling tower in preparation for processing in two ANUBIX™B anaerobic UASB type methane reactors with biogas flare. The ANUBIX™B methane reactors are covered with removable GRP odour control covers, under which bad odour components (including H2S) are sucked away by vent air blowers and injected into the aeration basin for oxygenation.

The effluent from the anaerobic treatment is further treated in an aerobic activated sludge system, using GWE’s ASTEROX™ process. This process uses recycle activated sludge re-aeration in front of a selector, which is proven to enhance biodegradation of organic components that are difficult to break down. The effluent of the aerobic polishing step goes to a tertiary DAF with chemical flocculation step for further removal of COD, TSS (total suspended solids) and colour.

Excess primary sludge, aerobic sludge (after processing in a DAF thickener) and tertiary sludge are dewatered in a screw press type mechanical dewatering plant which reaches the minimum required 40 per cent dry solids content of the sludge cake required to be used as biomass in the factory’s steam boiler. Excess anaerobic sludge is not dewatered, because it is valuable for use a seed material to start up anaerobic reactors elsewhere.

“As recent world instability shows, natural disasters and political and economic upheaval can produce wide fluctuations in fossil fuel prices which can only increase over time. So optimized waste water treatment combined with the extraction of green energy and water re-use makes a lot of sense – not only as a counter to global warming and water scarcity, but also as an insurance policy or hedge against future fossil fuel price fluctuations that are often impossible to predict. Efficient processes also help manage dwindling fresh water resources,” says Mr Ombregt.