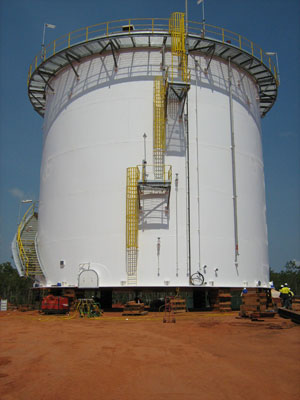 A system of Enerpac high-force hydraulic cylinders operating upside down has been used successfully to position large condensate storage tanks for Woodside Energy on the Northern Territory coast.

The 180 ton tanks were manufactured in Perth then barged up the coast and finally trucked to the remote area where they will hold liquid condensate piped from the Blacktip gas field in the Joseph Bonaparte Gulf approximately 245 km southwest of Darwin.

Erection of the condensate tanks is being undertaken by Monadelphous, a leading national engineering group, near the Northern Territory’s Wadeye aboriginal community between Darwin and Wyndham in the vast Northern Territory, which covers 1.3 million sq km but has only 1 per cent of Australia’s population.

The Enerpac hydraulic cylinders were supplied to Monadelphous by Winnellie Hydraulics, Darwin, who developed and tested the positioning system prior to delivery. 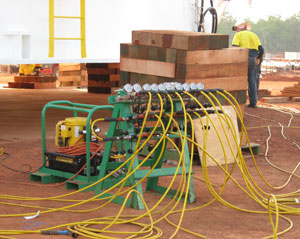 “We had to design the cylinders for a lowering not a jacking job, to allow a controlled descent of the storage tanks into position,” said Richard Nicholson of Winnellie Hydraulics. The system had to be not only very safe – a priority of Monadelphous and Woodside – but also very reliable and serviceable, because of the remote area in which it was deployed.

This was an interesting challenge, he said, because the heavy storage tanks measure about 18 metres diameter by 18 metres high. (Two slightly smaller tanks will follow, with more to come later).

After being manufactured in Perth and barged up the coast, the tanks were offloaded at a purpose-built wharf onto multi-wheeled low loader transporters that drove onto the barges.

The transporters slid their trailers slid beneath the tanks, jacked up the trailers and hauled the tanks on a two kilometre journey from the wharf to the storage site.

On arrival, the trailers lowered the condensate tanks onto blocks before driving away. The weight of the tanks was then taken up by Enerpac hydraulic cylinders supported on another set of blocks.

Ten 100-ton Enerpac RR-1006 double-acting hydraulic cylinders were used through ATM-4 valving to safely lower each large tank into its final position. The cylinders were powered by a ZE-5420SE 415 V electric pump with a 20 litre reservoir and a remote control.

“There was much discussion with Winnellie Hydraulics about the best cylinders for the job, the configuration of the manifolds and the size of the pump. We worked this out with their assistance,” recalled Brian Wolter, Senior Project Engineer of the Monadelphous Group.

An A-frame was manufactured by Monadelphous to house the AM41 and AM21 manifolds assembled as one unit with an inbuilt flow control valve and gauges for cylinder control.

The Enerpac cylinders were welded upside down to the underside of the tank so that, as the blocks were progressively removed, the jacks didn’t have to be re-seated. Eventually the cylinders were lowered into a recess in the concrete that allowed them to be cut off the tank bottom and removed.

Lowering and positioning the tanks was a gradual process that was spread over two working days.

“We found that the centre of gravity of the tank might not be in the middle, which meant that one cylinder module would be carrying more weight than another. We had to adjust the positions of the modules around the tank circumference to best spread the load,” Mr Wolter said.

“We worked through the challenges as we went along. It was more a matter of technique than anything else. The cylinders worked fine. Richard Nicholson and the other reps at Winnellie were always very helpful.”

Other similar lowering jobs are planned by Monadelphous for 2009, including the positioning of 350 tonne tanks on the Wadeye site.

Enerpac’s RR-Series of double-acting cylinders have capacities ranging from 10 tons (101 kN) to 520 tons (5108 kN). They are rugged enough for the toughest job site uses and are precision designed for high-cycle industrial uses. All have a built-in safety valve that prevents accidental over-pressurisation.

For heavy lifting in remote locations, the RR-Series is typically powered by an Enerpac ZE-Series electric pump. These pumps are ruggedly designed and built to stand up to harsh industrial environments.