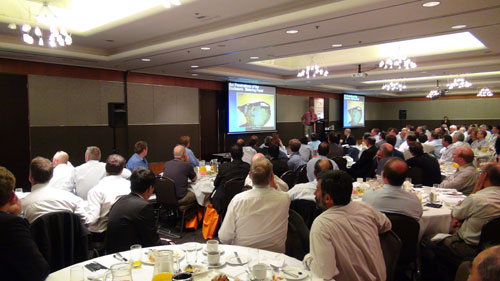 A leading authority on causes of industrial switchboard failures says energy saving Power Factor Correction (PFC) technology should be housed separately from switchboards and motor control centres to minimize damage and downtime resulting from any failures.

Consulting Forensic Electrical and Mechanical Engineer Mr Russell F. Lee told the 2012 NSW seminar of the National Electrical Switchboard Manufacturers’ Association, NESMA, that PFC technology is good technology “but you have to control how it is used and put it in a separate room for prudent risk management.

“Never put the PFC equipment in the same room as the main switchboard or motor control centre, or other apparatus for that matter. Put the PFC gear in a separate and fire-isolated room.

“It is all about prudent whole-of-life management of switchboard systems and application of PFC technologies, because PFC capacitors can and will fail. After five years, you have got to have capacitors checked. The alarm system should shut down the PFC system in the event of high temperatures,” said Mr Lee, who has more than 50 years industry experience and is one of its foremost investigators of the cause of equipment failure.

“With the introduction and now widespread use of metallised polypropylene capacitors, in particular, the incidence of fires because of capacitor failure and ignition must be taken into account during the design, operation and maintenance of switchboards.Factors underlying capacitor risk include:

“Capacitors don’t often burn, but when they do it can be catastrophic for places such as industries, hospitals and shopping centres if the fire can spread readily because the capacitors are attached to the same chassis as the switchboard.

“It is much better for safety and damage limitation if the capacitor is separate and therefore burns in its own room with its own sprinkler, rather than it be allowed to destroy three or four modules of the adjacent board and contaminate maybe three or four others, greatly magnifying the damage and downtime. You have got to be able to cut off the switchboard and limit the damage,” Mr Lee told more than 100 industry representatives at the NESMA NSW annual seminar in Sydney on October 29.

“Designers need to remember that the lowest first cost is not always the right approach when safety and reliability are concerned.

“The idea that it will become someone else’s problem should give engineers and tradesmen pause for concern. Bear in mind that WH&S laws in all States and Territories have implications for designers, manufacturers, installers and end users.”

Major presentations to the NESMA seminar available on (website reference to come) included: