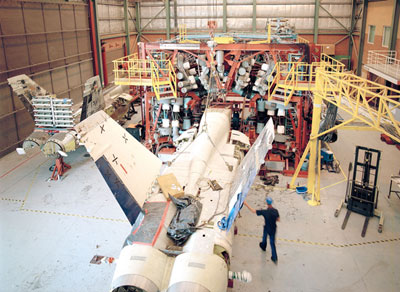 Cost-efficient use of simple industrial actuators has helped Australia’s Defence Science & Technology Organisation to implement a programme designed to achieve tens of millions of dollars worth of extra lifespan for the RAAF’s F/A-18 fighters.

The Air Springs, mounted against the airframe, were cycled to reproduce the enormous G-forces generated as a supersonic F/A-18 was put through its paces.

Engineer Mr Rob Boykett led the programme developing the huge computerised testing rig which enfolded the F/A-18 fuselage and subjected it to diverse forces generated by the air springs and by other electric, hydraulic and pneumatic actuators developed or adapted by the laboratories.

The rig – larger than many two-storey apartments – was equipped with hundreds of electronic sensors to measure each fluctuation in the airframe as its actuators duplicated the buffeting and shuddering felt as the F/A-18 exercised its phenomenal manoeuvrability, which includes the ability to maintain a 45-degree angle of attack.

Australia has 71 F/A-18s, which collectively cost billions of dollars. If testing can extend their lifespan by even 10 per cent, the potential savings amount to hundreds of millions of dollars, said Toolern Engineering Pty Ltd, Victorian distributors for Air Springs Supply Pty Ltd, which supplied air springs for the project.

“Australia’s F/A-18s are subjected to greater stresses than their American counterparts because they are used for a greater variety of missions,” said Toolern Engineering Manager Mr Paul Butler. “Because the aircraft represent a huge investment to countries such as Australia, we have to look after them very carefully.” 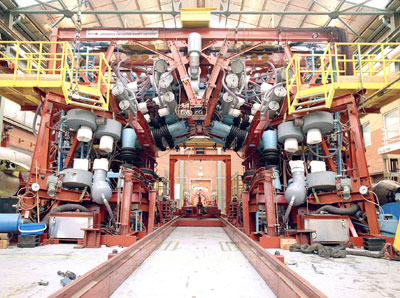 “The problem of metal fatigue and material failure is widespread across a broad range of engineering and manufacturing industries,” said Mr Butler.

“Programmes such as this, which anticipate problems and prevent premature breakdown, can save producers a fortune and increase the safety of their products.

“It is a great example of a Government service developing unique technology which is saleable nationally and internationally.”

Air Springs have previously been used in such high technology projects as weapons testing and sonar research.

Their exceptional vibration isolation efficiencies (more than 99 per cent in many applications) complement their ability to rapidly apply between 40 and 40,000kg of actuating force. When they are not being used to test the airframes of supersonic aircraft, the durable Air Springs are used to provide actuation in such applications as stamping presses, conveyor lines, materials handling equipment and process engineering machinery.