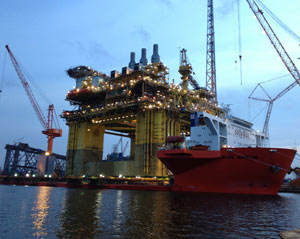 The superlifting and launch of a 43,000-ton floating oil production system in Malaysia for the Gumusut-Kakap offshore field has set high benchmarks for safety through its use of sophisticated synchronous hydraulics to lift, balance, weigh and smoothly launch massive resources structures.

Arranged in two main groups in east and west configurations, the 12-in (300mm) stroke cylinders with stroke sensors were used to hoist pontoons and superstructure prior to their joining and launching of the completed structure. The active skids, mounted on guidance tracks, were used for weighing and establishing structures’ centre of gravity to ensure safety and structural integrity, while also ensuring that the structure did not deflect outside of a tightly controlled range during the lifting and launching process.

Powerful pull cylinders were used to carefully control the completed structure’s gentle movement along the skid tracks onto the vessel Blue Marlin awaiting it in the Straits of Johor during May.

While the Enerpac technology employed is capable of lifting and shifting far greater weights than the Gumusut-Kakap FPS (it can lift more than the equivalent of the 70,000 ton deadweight of a typical Panamax tanker, for example) it the system’s ability to sense and control any deflection of the pontoons and main superstructure structure that won it plaudits for protecting structural integrity throughout the lift-weigh-shift-and-launch process.

Left to Right: One of the skidding jacks, sensors integrated into each cylinder

A feature of the system is its ability to correct such deflection within loads, which often occurs from edge to centre of structures or reflects point loads imposed by heavy components or other sources of stress. The potential for such deflections outside of a pre-set design range is detected by the cylinder’s sensors, which feed the information back to the central PLC controller, which in turn directs more lift where it is needed to maintain deflection tolerances across the structure.

Conoco Phillips Construction Manager Mr Michael Heck said “The Enerpac technology gave us the ability to closely control deflection on this project within the required range of 210mm over a 70 m span, offering the high level of safety that was integral to the joint venture partners in the project.”

Joint Venture partners include Shell, Conoco Phillips Sabah Ltd and PETRONAS Carigali. The FPS is owned by Malaysia International shipping Corporation (MISC Bhd sold a 50% stake of Gumusut-Kakap Semi-Floating Production System (L) Ltd (GKL) to Petronas Carigali Sdn Bhd ), which will lease the FPS to the joint venturers, who will operate it in 1200 metres of water, sending oil by pipeline 200 km to Sabah.

Enerpac skidding sets (pictured here with pulling cables in foreground) were used to skid the East-West pontoons of the structure prior to integration with its topside.

Enerpac uses the synclift system to adjust the alignment of the hull to prepare for topside integration. Before loadout onto the ship Blue Marlin, Enerpac lifted and weighed the completed FPS. Structural integrity and deflection of the FPS were maintained by the synchlift system via master controllers, bottom right. During the crossover from the dry dock to the vessel (along the skid track bottom left), load shift is monitored using Enerpac’s master controller. The Enerpac system is also used to lift the FPS and provide sufficient clearance for the buoyancy tank insertion before lowering.

Maintaining integrity of the structure during lifting and launching is vital not only to safety during the lift and launch process, but also to ongoing structural integrity and safety during its operational life.

By maintaining the internal integrity of the structure – and not exposing it to susceptibility to developing cracks and faults caused by uneven stresses during lifting – the system helps to ensure the durability and safety of the structure in service, says Mr Heck.

“Enerpac’s technology and expertise is central to the ability to maintain the structure’s profile during the skidding. Major structures such as the keel can take only so much stressing – and there is plenty of decentralised stressing involved during an operation such as this.

“Without correct stressing, you could get bulging in the middle of the structure where jacks would lift higher, while it could be lower at the edges.

“But with the sensor technology controlling the lift, if it gets of out the planned alignment, you can stop the lift and bring it into line.”
In conjunction with Enerpac South Malaysia distributor Perkasa Machinery, The Enerpac South-East Asia operation headquartered in Singapore provided global expertise in synchronous lifting to complement local capability.

“This support was important, because Enerpac has the experience in the field that we don’t have in the yard,” said Mr Heck. You have to have highly skilled people accessible for a complex and challenging operation such as this. Enerpac has such expertise in applications,” he said. 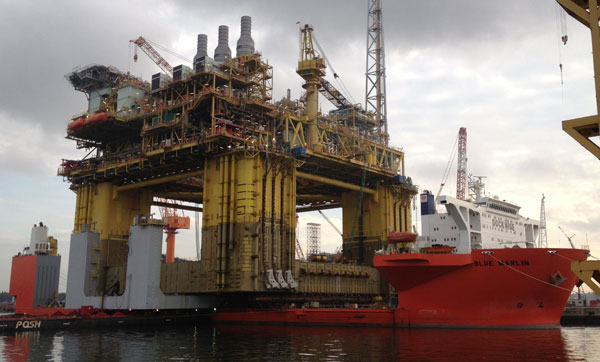 After progressing along the skidding track, the FPS arrives onto the Blue Marlin.

Enerpac global expertise employed on the project was drawn from the Enerpac Integrated Solutions team, which is dedicated to lifting, shifting and manoeuvring some of the world’s heaviest and most challenging objects and structures.

Integrated Solutions’ (IS) projects include the launch of the world’s highest viaduct, France’s Millau Viaduct, lifting the famous Golden Gate Bridge in San Francisco for seismic retrofits, and the use of Enerpac skidding systems in construction of the world’s first LNG regasifier in Italy, involving 90,000 cubic metres of cement and 30,000 tons of steel.

In addition to synchronous lifting technologies, IS capabilities include hydraulic gantries for lifting and positioning onshore and offshore plant and SyncHoist crane technology.

“Synchronous PLC-controlled lifts greatly enhance safety and precision by providing minute control – down to 1mm or less during the lift, measured over hundreds of cylinders arranged in clusters. Enerpac’s proven global expertise in this field is complemented throughout South-East Asia by a strong technical supply and support network,” said Mr Wang.