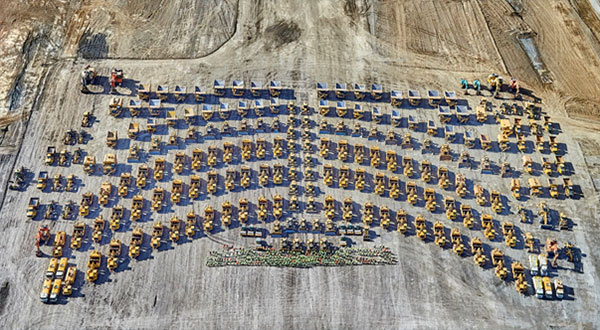 Massed civil engineering equipment at the site of the new Western Sydney airport, where Hydraulink is working with Caterpillar to optimise service standards and uptime. Picture: Skyviewaerial

The Australasian and international Hydraulink organisation is relishing an important role at the site of the new Western Sydney Airport in helping to maintain a fleet of civil engineering machinery described by industry veteran Jeff McCoskery as one of the largest he has ever seen.

Hydraulink Campbelltown franchise owner Jeff McCoskery – who provides airport site services to the leading mining, construction and earthmoving rental business Salmon Engineering Services – says that even after more than 30 years in the mining and civil engineering industries in Australasia and internationally, he is hugely impressed by the might of the assembled fleet.

“I think there are something like 200 pieces of civil engineering equipment in our immediate area. It is a great opportunity for us and a great opportunity for us to grow our Western Sydney team with skilled locals looking for good jobs,” says Mr McCoskery, who shares facilities with Salmon in providing the vital hydraulic hoses and fitting on which the equipment depends for continuous operation.

Mr McCoskery has come well equipped for the airport site challenge by installing on-site one of the biggest additions to Hydraulink’s South-Western Sydney service fleet – a vivid yellow 12.5 metre Hydraulink service bus fitted out with a full workshop so the mechanics and service staff on-site at the airport site don’t have to waste time searching for skills and parts. The bus is believed to be one of the biggest mobile service centres in the hydraulics industry in Australia or New Zealand. 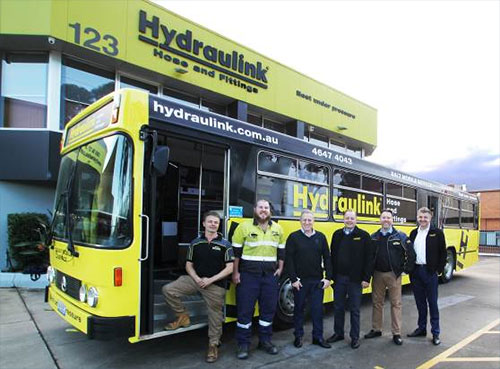 “You can’t miss us – we really stick out. The machinery service guys on-site love the idea that we are right on hand to help them in their jobs on the huge diversity of machinery brands on site, just about every brand in the market, and we can service them all.

“The bus has really been a big hit on a big site – a lot of the service guys have never seen anything like it,” he said of the ex-State Transport Mercedes, which was converted by Mr McCoskery and his brother Steve for his Hydraulink franchise. Introduction of the bus was one of their first actions after joining the Hydraulink network to get the backing of an energetic franchise network to provide the ongoing education and support to tackle the biggest jobs out there.

The big yellow bus is a centrepiece of the Hydraulink expansion programme to demonstrate the company’s can-do ethos and engineering skills across its network. The company – which has more than 400 service points throughout Australia, New Zealand and the Pacific Islands – is targeting the establishment of multiple new franchises and the simultaneous creation of new skilled job opportunities in the Southwest Sydney area around Badgerys Creek, where youth unemployment, in particular, exceeds 12.4%. 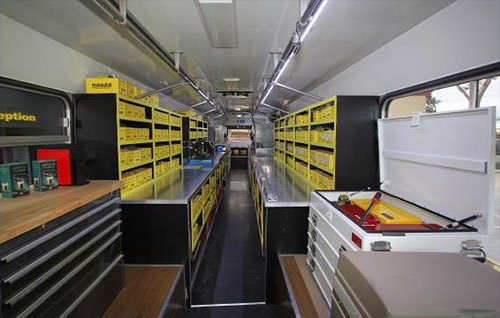 Service by the busload – the interior of the mobile service centre

Jeff and Steve worked nearly every Saturday for months transforming the bus into a fully equipped mobile service centre, mobile billboard and mobile customer reception centre combined, complete with tool benches, stock and even mobile barbecue for hospitality, doing the job totally themselves with skills and training fostered by Hydraulink.

Hydraulink Australia National Franchise Manager Wayne Abbott says the new airport is expected to generate as many as 45,000 new jobs over coming years, with major investment initially in the engineering, civil and construction sectors, followed by ongoing growth worth billions of dollars in aviation, transport, logistics and infrastructure.

“These are all major areas of focus of the Hydraulink hydraulic hose and fitting business, where we can create quality businesses and skilled long-term jobs,” he says. “The bus works for Jeff and our national teams as a showpiece for the skills, training and initiative we foster in franchise operators and the people they employ, which is what the region needs. We want to develop skills and businesses to benefit the many people in South-Western Sydney, where the new Badgerys Creek airport is becoming a magnet for opportunity,” said Mr Abbott. 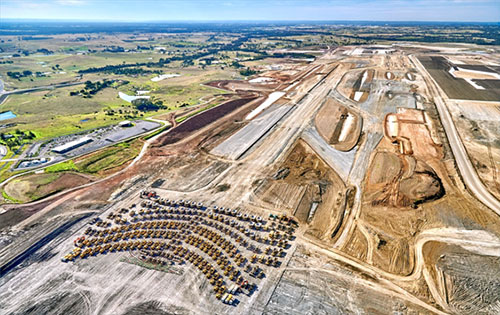 The earthmoving fleet in perspective on the new airport site as it takes shape. Picture: Skyviewaerial