A suite of data centre access security products is being introduced to Australasia by global entry solutions leader Royal Boon Edam in response to threats to private, public and corporate information.

The architecturally harmonious Tourlock, Circlelock and Lifeline ranges are among Boon Edam technology deployed by some of the world’s biggest companies, including household names in data management and web service providers as well as other Fortune 500 companies.

“Leaks of public and private data can occur not only because of external hacking, but also because of unauthorized entry into sensitive facilities such as data centres,” said Boon Edam Australia Managing Director Mr Mike Fisher.

“Our experience across top corporate, public and government facilities in 27 countries – including Fortune 500 HQs and diplomatic and legislative houses – tells us data centre access security is a now a 24/7 issue that is often beyond the scope of expensive multiple manned security points.

“Data Centres have to deal with a constant threat of data theft that can and does cause highly public corporate humiliation and loss of trust, which is very hard to regain once it is damaged. Additionally, loss of data due to damage from activists, thieves or other threats, can end up costing in the millions of dollars.

“Insurance companies are now asking for strong physical access security to be in place as an integral part of the more stringent risk management measures required to combat these threats.”

In response to the need to provide high security even at times when security staff are scarce, Boon Edam Australia’s latest Tourlock, Circlelock and Lifeline ranges of access security product families provide security for not only the entrances to data centres, but also can be used for company perimeters, corporate HQ entrances and designated building facility entrances, as well as other sensitive interior areas.

Boon Edam’s latest products – which have evolved from market leading families of product proven in thousands of applications – are backed in the field throughout Australasia by dedicated service and security teams assembled here by Boon Edam Australia. They incorporate the same level of quality and architecturally harmonious style as the giant, 5m high, Boon Edam revolving doors that are the centerpiece of the public entrance to the Rialto refurbishment in Melbourne.

The level of security offered by the Tourlock 180+90, for example, can be adapted to individual requirements, using the latest advanced StereoVision 2 technology, which merges two types of sensing technologies, optical and near-infrared light, to monitor the compartment of a security revolving door or portal. The two technologies work together to determine displacement and distance by measuring the time it takes light to travel from the instrumentation to an object and back. This new and highly advanced system can accurately tell the difference between two people and one person holding a box or luggage to minimise false rejections. 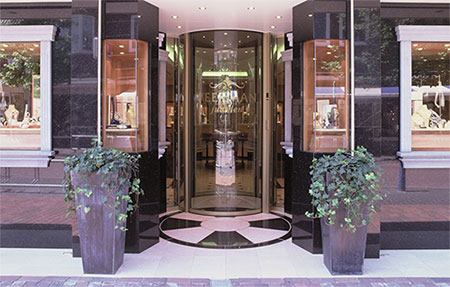 Equally at home safeguarding the world’s leading brands of jewelry as well as datacenters,
the elegant Circlelock family of security entrances combine architectural harmony
with the highest-level security features available from Boon Edam.

The softly arched Boon Edam Circlelock series of security entrances, meanwhile, incorporates two bullet resistant curved glass sliding doors governing access to and egress from a glass portal that offers a spacious and comfortable entrance for the user, while the integrated security systems operating within it ensures only authorised people can pass through to the building or facility being protected.

“Circlelock is used where it is imperative that only the right person enters an area of your building,” says Mr Fisher. “The design blends beautifully with the décor of modern and classic buildings around the world, proving that beautiful form can be combined with efficient function. Because of its good looks and high security combination, it is now proven in use globally in applications such as government and diplomatic buildings, banks, airports, prestige jewelry, as below, and high value retail outlets, computer and data server rooms and corporate offices and headquarters. 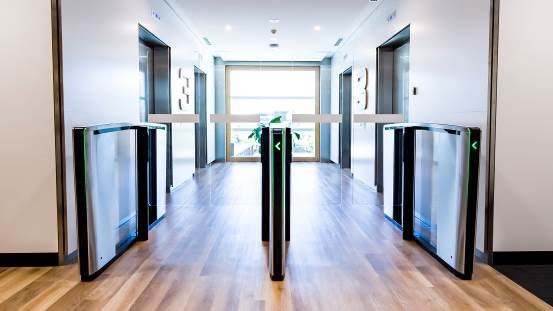 Boon Edam’s latest Speedlane Lifeline Series of entrance security gates was introduced to Australasia at the Security Expo 2017. It is incorporated into major public and private security applications in Australia and worldwide, including in legislatures, treasuries, diplomatic posts and mobility hotspots such as entrances to high rise HQs.

“Designed to the highest standards of quality, aesthetics and ergonomics, the Lifeline Series is an intuitive, refined and secure entry management system for guiding and managing people flow through to secured areas of buildings,” says Mr Fisher. The Lifeline Series interacts with those who approach it, guiding the flow of high visitor levels and acting as a boundary between public and private worlds.

Boon Edam Australia National Sales Manager, Mr Alastair Russell – who has over 30 years’ experience in entrance security and its associated technologies – says Lifeline is unique to the industry in that it has approach sensors, which allow the unit to sleep until someone comes within range of the sensor.

“For buildings with sustainability objectives, or those who are interested in saving power, this adds a huge advantage,” he says.

“The Lifeline Series is one of Boon Edam’s most versatile and useful ranges for entrance security, because it can be used in so many different scenarios, from allowing smooth and guided disability access through to multi-tiered security buildings, where high volumes of people need to be guided simultaneously to different areas,” said Mr Russell.

Other major advantages of the Lifeline Series include its intuitive symbols, ergonomic design, premium quality materials and customisation to fit a diversity of interior designs.