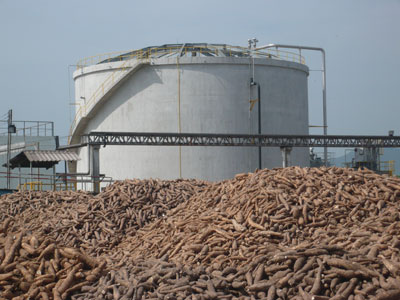 A world first in the conversion of food processing pulp waste to produce greater quantities of green energy has been successfully introduced to Asia’s burgeoning cassava industry.

The groundbreaking RAPTOR™ anaerobic waste water technology with ANAMIX™ thermophilic digester for the processing of waste cassava pulp and its conversion into biogas has been installed by Global Water Engineering at the Chok Chai Starch tapioca starch plant in Uthai Thani, Thailand.

The technology – represented in Australia by CST Wastewater Solutions and broadly applicable to food and agro industries here – greatly reduces an environmental pollution issue by processing and converting to useful green energy the leftover fresh pulp, which starts to ferment once stored. The rotting organic material can generate considerable odour and release heavily polluted wastewater leaching out of mountainous pulp piles.

The installation also extends the existing benefits of GWE waste water treatment and biogas conversion technologies at Chok Chai Starch. Employed on waste water streams, such technologies can achieve up to 99% COD removal in some types of wastewater (COD, chemical oxygen demand, indicating the amount of organic compounds in water). Existing GWE anaerobic technologies of the type employed at Chok Chai Starch typically produce enough green energy to pay for the cost of their installation in typically one or two years.

The latest technology installed at Chok Chai Starch helps the factory achieve a minimum of 80 per cent conversion of the organics present in the pulp to biogas (methane), treating a maximum of 370 tons a day of wet pulp containing 68,700kg a day COD (chemical oxygen demand). Daily biogas production exceeds 30,000 Nm3 at 60 per cent CH4 content.

The Chok Chai Starch RAPTOR™ starch plant produces enough biogas to generate 3.3-3.4 MW of renewable electricity for sale to the local grid, while the biogas produced by previously installed ANUBIX™ B reactors is heating the factory’s two thermal oil boilers using green energy produced from digestion of organic matter in its waste water.

“Advanced anaerobic technology such as that installed at Chok Chai Starch is also strongly applicable to any factory or process with one or more digestible solid waste streams.” says Global Water Engineering CEO Mr Jean Pierre Ombregt, who has been a world leader in clean water and green energy solutions for more than 35 years. “Such plants – including breweries, fruit, food waste, agro industries, and energy crops including corn – can easily use this technology to generate energy. It opens the door to environmental and production efficiency gains globally,” says Mr Ombregt.

GWE has been involved in more than 300 water and waste water projects in 60 counties in regions including Africa, North and South America, Australia, China, Europe (including Eastern Europe), Russia and South-East Asia.

Water, heavy fuel oil and electricity are crucial to successfully operating such starch factories, says GWE. Production of 100 tons of native cassava starch consumes on average about 3600-4000 litres of fuel oil and about 1 MW of electricity, says GWE.

The processing of cassava roots (fresh roots or dry chips) into native and modified starch also produces significant waste streams in the form of both wastewater and solid organic waste (peel and pulp).

In terms of waste water, on average a ton of native starch produces about 220-250 kg COD (chemical oxygen demand, indicating the amount of organic compounds in water).

Traditionally starch factories use polluting, low efficiency open lagoons for the treatment of their wastewater. These lagoons occupy large areas and they cause the loss of large amounts of potential green energy in form of biogas (a mixture of CH4 and CO2, which escapes into the air). Besides the energy loss, the environment is also damaged by the emitting of large amounts of CH4 greenhouse gas into the atmosphere.

Cassava roots, left, the processing of which produces significant amounts of wastewater and solid waste, right

GWE’s ANUBIX™ B anaerobic reactors have for more than 20 years offered an integrated cost-efficient and environmentally harmonious solution for the wastewater, fuel oil and electricity needs of a starch factory.

These advanced biological wastewater treatment installations use anaerobic bacteria (granular sludge) in closed reactors to degrade the organic compounds in the waste water and covert them into biogas.

This captured biogas can then be used as a source of renewable energy for the heating of thermal oil, generation of steam, production of electricity – or a combination of these to be used in several stages in the production of starch.

GWE’s installations are capable of supplying 100 per cent of the fuel needs (biogas replaces heavy fuel oil in boilers or direct-fired starch dryers) and 75 per cent of the electricity needs of a modern starch factory.

Through the years, GWE has supplied 33 such plants, so it can be considered an extensively proven technology.

The Latest Advance – Conversion of Pulp

There has remained, however, the problem of the second main waste product, called pulp or wet cake, which is a solid fibrous waste product remain from the roots after the starch extraction. It usually has between 15-25 % dry solid content, almost entirely organic, and 30-50 % of that is encapsulated starch which was not removed in the starch extraction process. This represents about 270-370 TS (total solids) per ton starch produced, which further represents 300-370 kg COD per ton of starch produced.

Traditionally the wet pulp was dried on concrete floors and then sold as biomass or for animal feed. However, in the last few years, because of ever-rising fuel prices, transport costs have become prohibitive, so most factories are left with mountains of this waste product.

Pulp as it emerges, with pulp extractors behind (left) and Chok Chai Starch digester and biogas treatment (right)

As a result of demand from several tapioca starch producers, GWE embarked in 2006 on the development of a novel anaerobic digestion process which would allow the bulk of this pulp to also be converted into biogas. Based on the comparative COD figures and anticipated conversion rates of about 80-85 % for this material, this pulp can generate another 25-35 % of biogas in addition to that already produced from wastewater. At the same time, the volume of waste product is greatly reduced.

The challenge GWE faced was to develop a process that was not only technically sound and with high performance, but also economically affordable both in terms of capital expenditure CAPEX and in terms of operating expenditure OPEX.

After a year of thorough bench-scale testing using various scenarios, GWE was finally ready in early 2007 to launch its process called RAPTOR™ (or Rapid Transformation of Organic Residues).

The quantities of methane produced by advanced thermophilic RAPTOR™ installations such as Chok Chai Starch can diminish or even completely replace the use of fossil fuels in the production process: one ton of COD (chemical oxygen demand) digested anaerobically generates 350Nm3 of methane, equivalent to approximately 312 litres of fuel oil, or generates about 1,400 kWh of green electricity.

The Executive Vice President of Process and Research and Development at GWE, Mr Pascal Pipyn, says the RAPTOR™ process employed at Chok Chai Starch consists of:

The efficiency of the RAPTOR™ process on Tapioca pulp meets and exceeds expectations for this widely produced product, while the stable and reliable fermentation process ensures long term performances.

As a result of their efficiency, anaerobic digestion facilities have been recognized by the United Nations Development programme as one of the most useful decentralized sources of energy supply, as they are less capital-intensive than large power plants. They can also benefit local communities by providing local energy supplies and eliminate the need for large and often smelly and environmentally challenging settling lagoons.

With increased focus on climate change mitigation, the re-use of waste as a resource and new technological approaches which have lowered capital costs, anaerobic digestion has in recent years received increased attention among governments in a number of countries, particularly those of emerging regions where infrastructure investment is high, such as Asia, South America and Eastern Europe.