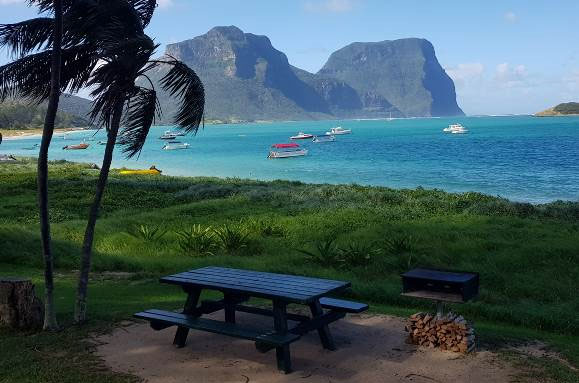 The initiatives, by the Lord Howe Island Board, complement the island’s broader environmental initiatives, including an island-wide residents’ cleanup campaign initiated by Clean Up Australia champion, the late Ian Kiernan and complementary programmes to eradicate entire species of foreign weeds and pests. Ultimately it aims to be totally free of unwanted flora and fauna introduced more than 100 years ago. Once this is done, it can begin re-introducing species currently extinct in the wild. 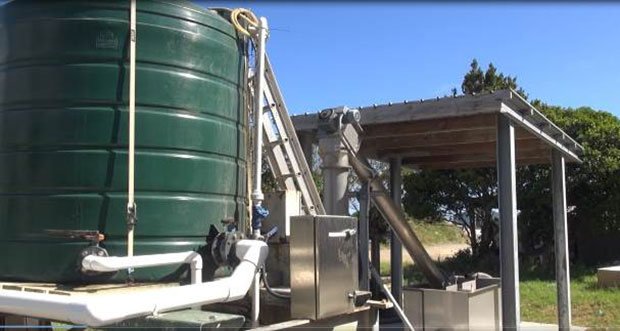 CST Wastewater Solutions’ screen compactor, right, pre-screens effluent prior to the septic wastewaters being pumped to the polymer dosage tank

Meanwhile, the Board is enhancing its environmental credentials by introducing solar power to provide two-thirds of the island’s annual energy needs, while also seeking EPA approval to re-use as compost the solids from treated sewage effluent produced by its environmentally sensitive, low-energy wastewater treatment plant.

It also facilitates practical and cost-efficient environmental progress by reducing the amount of hazardous waste that in many situations in Australasia and South Asia would need to be expensively transported to landfill. The technologies are designed for small to medium applications (hydraulic capacities from 264-4092 gal/hr; approx. 1000-15,500 litres) including urban, municipal, agribusiness and industrial applications as well as remote and environmentally sensitive applications of which Lord Howe is an outstanding example.

CST Wastewater Solutions’ separation and dewatering technologies – selected by the Lord Howe Island Board after a detailed consideration process of the best solutions – help avoid sloppy, unhygienic output and material that is difficult to handle and dispose of on the virtually rubbish-free island.

The conservation-minded Island is home to just 400 residents who welcome an equal number of tourists at any one time to clean, green laid back resorts, warm white beaches, vibrant recreational fishing and Australia’s southernmost coral reef, located around 600km off the NSW east coast from Port Macquarie. 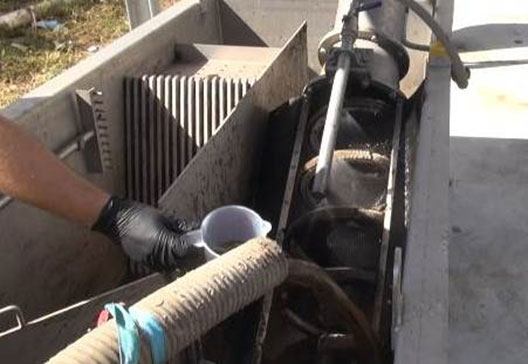 “These environmental and waste initiatives enjoy the support of both the local resident and tourist business communities,” says David Waterhouse, Manager, Infrastructure and Engineering Services, Lord Howe Island Board. “The people of Lord Howe see it as great initiatives that we are seeking to return flora, fauna, emissions and water resources closer to their natural state existing when the island group was discovered, (in 1788 by Lieutenant Ball, Commander of H.M. Tender Supply, on a voyage from Sydney to Norfolk Island and named after the Lord of the Admiralty at the time).

“And, of course, unique land and marine creatures and a pristine environment are what people come here to enjoy, with glorious trekking, diving, fishing and family relaxation. It is a win-win for residents and visitors, who love the opportunity to relax in a clean, green environment which is not overcrowded or damaged by excessive tourism. As a community, we want to retain the original beauty of the environment and combine it with relaxed, unspoilt uncrowded tourism where visitors can leave their doors unlocked and enjoy relaxed privacy with quiet roads and beaches with space and beauty to spare,” says Mr Waterhouse. 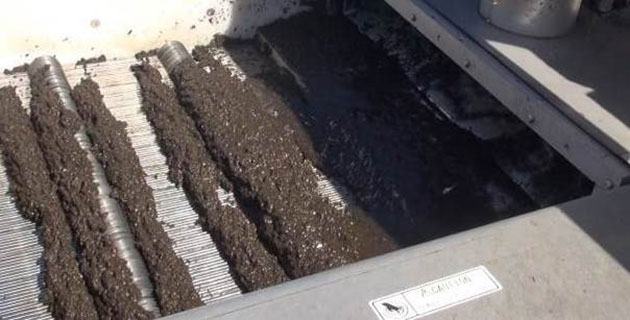 Separated solids sludge being processed on the KDS system’s unique roller system, above, while the system also produces much clearer and higher quality liquid effluent requiring less processing for re-use, below 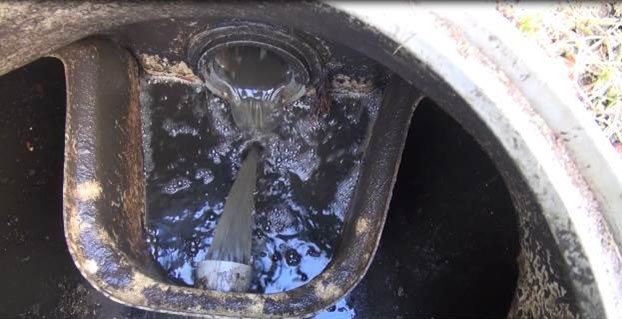 Lord Howe Waste Management Facility Supervisor, Mr Bradley Josephs, says the facility’s waste water treatment plant has produced cost-efficient and practical environmental, operational and OHS benefits since it was introduced as part of a full package to separate biosolids, liquids and residual waste in a three-step process of which the CST technology is an integral part. The CST technology uses a combination of coarse and fine screening and KDS advanced dewatering technology to produce the more hygienic and more compact output that can be added to recycled compost streams.

“Our benefits to date will be extended further if EPA approval is received to incorporate the compacted solids from the effluent into compost for use on the island, incorporating previously odorous waste into a valuable resource and further reducing the need for transport and landfill,” he says.

The WWTP plant compacts solid sewage waste to a fraction of the original volume of material that was previously laid out on drying racks to dewater – a process that smelt, involved much more handling, and could take extended periods to complete, particularly if the weather changed.

The new facility’s screening, filtration and KDS liquid-to-solid separator is also much more efficient in separating diverse solids from liquid, without clogging and producing a liquid component is much clearer and more suitable for speedier processing and re-use. 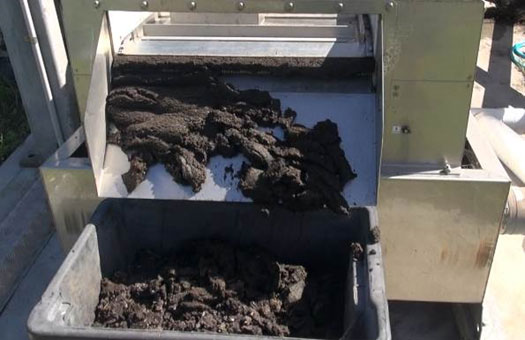 Solid waste compacted by the KDS separator is drier, more compact and easier to convert to valuable use in compost – rather than being a troublesome waste disposal problem

Septic waste from residential and commercial systems treated at this facility is drawn from about 220 septic water systems on the island, 25 of which are commercial operations. Currently pump-outs are delivered to the facility via an 1,800 litre wastewater tanker. The waste management facility can now handle greater volumes of effluent for the Island, the solid component of which is mixed with diverse other waste streams that are sorted, mixed and prepared for re-use through a Hot Rot composter. Waste treated in this way includes food waste, paper and cardboard, green waste and grease trap wastes.

“We have witnessed a strong range of benefits since installing the system; the drier biosolids, for example, can now be stored in smaller 50L tubs which are for more manageable. The old system required the solids to be dug out of the evaporating bays, resulting in greater man hours and far-from-optimum working conditions,” says Mr Josephs. 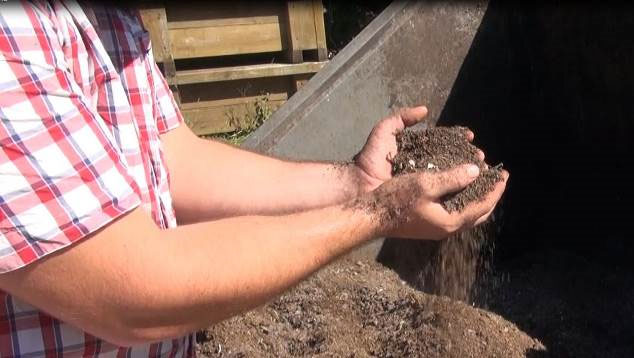 “The polymer dosage used in the new process is able to chemically remove suspended solids from the solution at a better rate than evaporation. This means that the liquid waste that is produced is much easier to treat via aerobic digestion,” says Mr Bradley, who is a qualified chemist. The precise polymer dosage process also allows the Supervisor to know how much time the plant will take to produce particular quantities of processed solid.

“Due to the ever-changing nature of sewage, previously you could never fully estimate the nature of how much solids you would receive in drying bays until the process was complete. Using an Excel calculation, we developed for polymer dosing with the new system, we can now make a good estimate of how much biosolid we have per batch and how much liquid waste we will produce. This has allowed us to be proactive with our management levels.

“Drying used to be something of a guessing game, with the drying beds and reed beds we used. It would vary with weather, with humidity and many factors, but now the liquid-solid separation is beautiful, swift, predicable and precise. This speeds up the process and enables us to tailor output for ongoing processing without waste storage issues.”

“Due to the area that drying bays took up for efficient separation previously, there was a powerful odour during processing. As the new system is all self-contained, there is minimal odour during the process.”

Waste liquid separated out by the CST system is processed via aerobic digestion, while the solids component is dewatered through the KDS installation is incorporated into the feed for the composting unit. This Hot Rot composting unit produces the finer, dried output for which the LHIB is currently undertaking a Resource Recovery Exemption to create compost for use by residents and businesses on the island.

“Due to the nature of the in-vessel composting unit on island, dried biosolids can be processed and used to create useful compost that will be available to the public,” says Mr Josephs. “The temperatures inside the composting unit are high enough to destroy harmful pathogens that are found in biosolids such as e-coli and salmonella. The biosolids are currently mixed with food waste, paper and wood chip at a ratio of 0.05/1/2/1 per day. Once we have more results in regard to compost composition, we aim to be able to create an optimum ratio of biosolids used in the procedure to produce compost and further reduce our environmental footprint.”

CST Wastewater Solutions Managing Director Michael Bambridge says his company was tasked to review a “best fit” sludge dewatering system for the septic waste, because the old infrastructure was becoming outdated and the existing drying beds were to be decommissioned. Mr Bambridge and his brother Peter Bambridge worked extensively with the Lord Howe Island Board to find an optimal solution that combined outstanding environmental performance with equally strong OHS performance – and which has a much smaller footprint than the drying rack system used previously.

“The CST screening, dewatering and compacting component of the WWTP system is more economical than previously, more compact in terms of site use, and uses less energy and minimal water compared to alternative systems. It accords well with Lord Howe’s environmental, waste, water and energy conservation objectives, which the Board is pursuing over a total range of environmental initiatives.” 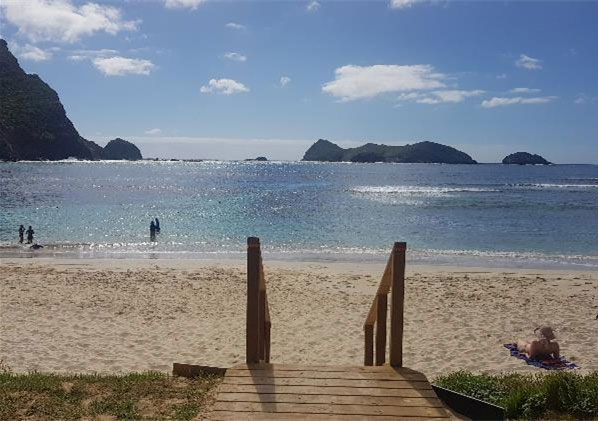 Lord Howe’s back-to-the-future approach to environmental progress and resource use has also resulted this year in the introduction of solar power to the island to turn off fossil-burning diesel generators by satisfying two-thirds of the island’s annual energy needs from the sun.

“Our environmental programme on the island benefits from multiple streams of good technologies and environmental good practices,” says Mr Waterhouse.

“Because we are isolated from many destructive outside influences, we have a unique opportunity to comprehensively plan, implement and measure our environmental progress comprehensively and over decades.”

“Our programmes interact with each other, to produce an overall result that we aim to be outstanding – a programme that will not only benefit ourselves on the island, but which can provide a lead internationally to show what can be done by a community with a common conservation focus.”